A quote I came across, attributed to Marx*, which seems appropriate for the times:

Politics is the art of looking for trouble, finding it whether it exists or not, diagnosing it incorrectly and applying the wrong remedies.

A good analysis of the Irish backstop issue: https://www.cer.eu/insights/northern-ir ... lternative


The Brexit trilemma lives. The UK can have two of the following three things, but not all of them: single market and customs union exit; a whole-UK Brexit; and no Irish border. The existence of a backstop in the withdrawal agreement suggests that May, albeit reluctantly, understood this. But the penny still hasn’t dropped for many Brexiters in her party and beyond.

For remainers, there is no way to get back to 2016, just as for leavers there is no way forward to get what they were promised in 2016. In that sense, just as Brexit is on hold so too is Britain – suspended between an unrecoverable past and an unattainable future. Brexit has ceased to be, if indeed it ever was, understandable simply as an ‘institutional’ question about Britain’s membership of the EU. Instead it has morphed into a cultural battle about what Britain - England, especially, but not just England – is. So it has ceased to have an institutional answer, deliverable by normal forms of politics and policymaking. It is an aporia, a pathless path, with no way forward and no way back. 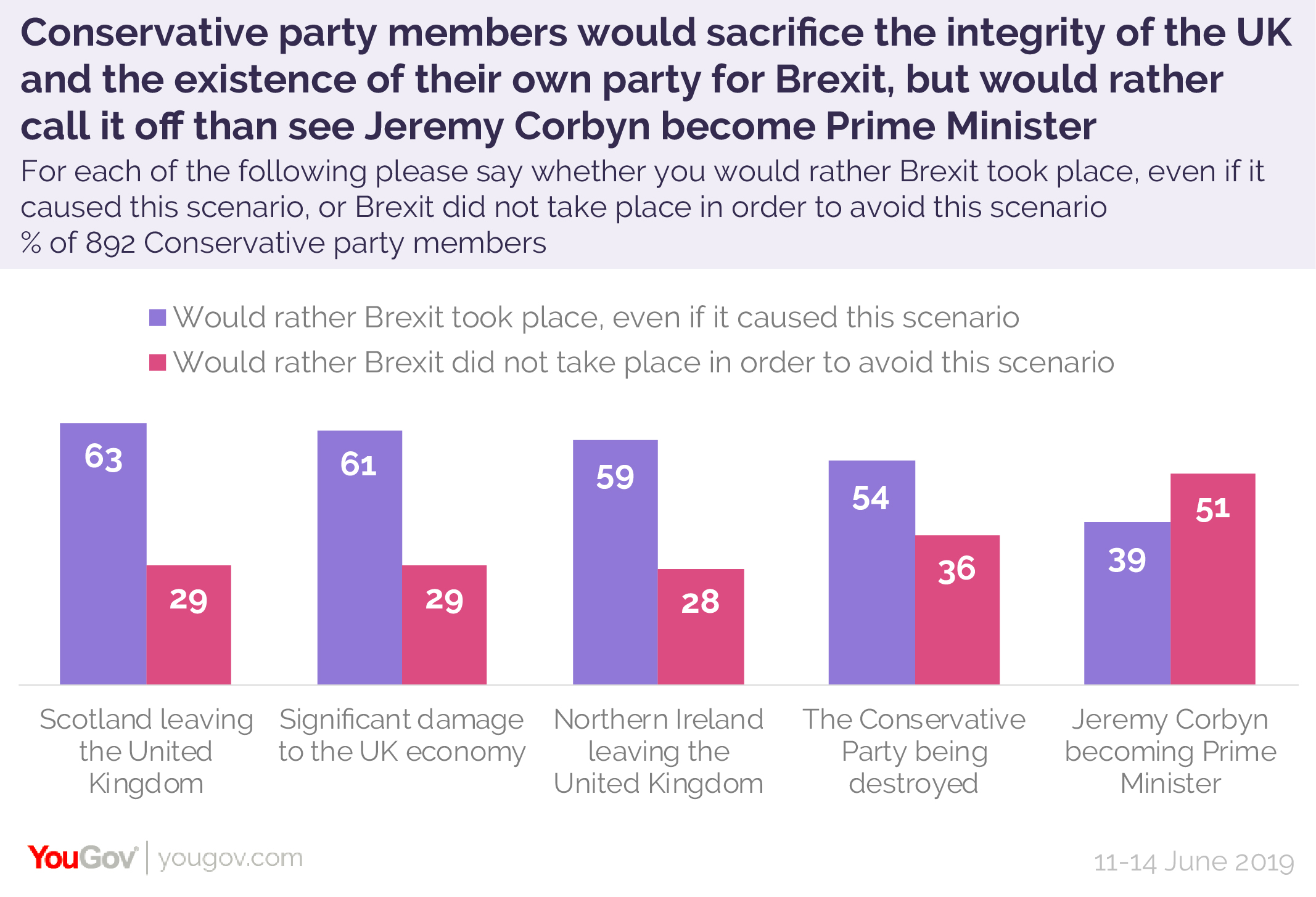 It's Catch-22. In order to become the Leader of the Conservatives they must promise Brexit at almost any cost, alienating the unionists. Then in order to deliver on their promise they must ask the confidence of a house that has rejected all those measures.
The ultimate irony is that the hard lines they adopt to win over the fossilised gammonites of the Tory membership may well be instrumental in having to gamble on a General Election and risking crossing that one line that the grass roots fear to cross.
Top

I gather that the few Brussels EU people who could be bothered to watch the Tory leadership debate last night (they have other priorities) concluded that the Brexit proposals from the candidates were either old ideas which had been rejected, or new ones which wouldn't work.

I can see that the Brexit saga still has a long way to run... even if the UK does crash out on 31 October, there will have to be years of negotiation to establish a new trading relationship with the EU, in parallel with the (probably conflicting) negotiations with the rest of the world.
Top

I've just caught a glimpse in passing of a Tory on Victoria Derbyshire's show being challenged over the plan to reopen the Withdrawal Agreement, which the EU has said is impossible. The response was something like "you have to believe that it's possible". In other words, if you wish really, really, hard, it might happen. Classic magical thinking!


The EU and South American economic bloc Mercosur have clinched a huge trade deal after 20 years of negotiations. The deal aims to cut or remove trade tariffs, making imported products cheaper for consumers while also boosting exports for companies on both sides. It is set to create a market for goods and services covering nearly 800 million consumers, making it the largest in the world in terms of population.

The EU has also concluded trade agreements with Canada, Mexico and Japan since Mr Trump's election. However, the EU deal with Mercosur could see savings on tariffs that are four times as big as those made in the Japan deal, EU trade commissioner Cecilia Malmstrom said.

Tony.Williams wrote: ↑
Thu Jun 20, 2019 10:18 am
I've just caught a glimpse in passing of a Tory on Victoria Derbyshire's show being challenged over the plan to reopen the Withdrawal Agreement, which the EU has said is impossible. The response was something like "you have to believe that it's possible". In other words, if you wish really, really, hard, it might happen. Classic magical thinking!

BoJo has the same view, expressed in today's Torygraph:


Mr Johnson has told the paper that the UK can get a "great [Brexit] deal" by having "self belief" and not being "so negative".

Don't bother with facts - it's all down to belief!

Interesting and complex article on Brexit, WTO, GATT24 and other stuff to pickle the brain.


In the run-up to the new Brexit deadline of 31st October hardline Leavers insist ever louder that Britain could simply walk away from the EU with no adverse consequences. They say the World Trade Organisation provides a perfectly good alternative framework and there is nothing to worry about. Boris Johnson, the frontrunner to be prime minister, has sided with them.

Mainstream economists, however, have spent years debunking these claims. They explain that WTO terms would in fact be a dramatic downgrade on the preferential deal we have with Europe. Crashing out would trigger serious economic disruption.

If the facts are in conflict with strongly-held beliefs, then obviously the facts must be wrong. There is therefore absolutely no point in looking at the facts, it's just a waste of time. QED.
Top

Mark Elliott, Professor of Public Law and Deputy Chair of the Faculty of Law at the University of Cambridge, writes on an important topic - "Can Parliament prevent a no-deal Brexit?"

For reasons that I have explained elsewhere, the Supreme Court’s Miller judgment handed Parliament a golden opportunity to take control of the Brexit process. That opportunity was immediately squandered by parliamentarians who — for fear of being castigated as “enemies of the people” — fell over themselves to write the Government a blank cheque when they enacted the Notification of Withdrawal Act. That Act handed the Government complete discretion over when Article 50 should be triggered and provided Parliament with absolutely no instruments of control over the ensuing process. Ever since, Parliament has been playing catch-up. As the autumn unfolds, and as the cliff-edge beckons, we will see whether the majority of parliamentarians who are opposed to a no-deal Brexit can recover the situation. As I have sought to show in this post, Parliament does have options open to it. But those options are limited in legal terms — and decidedly so in political terms.


I’ve said a few times on this blog that, for some time now, there have been no good solutions available. I now think that there aren’t any bad solutions either. Indeed, increasingly, I think there are no solutions at all.

The complexities, contradictions, fantasies and sheer lies of Brexit have simply overwhelmed the capacity of our political system to cope with them.

I've been reading the revelations about Operation Yellowhammer in yesterday's Times, part of the government's planning for a no-deal Brexit. The picture it paints of the chaos that would follow is really chilling. I do hope you have a well-stocked bunker available - you might need it. What's worse is that in several places the report emphasises that it isn't a worst-case scenario (that's addressed by Operation Black Swan), but is intended to be a realistic assessment of what is most likely to happen.

So what's the government's response to these revelations? A couple from the man who should know:

In other words, they just lie their bloody heads off.

Any wonder the quality of our leaders is widely regarded as a bad joke?
Top

Do you think the Times report is fair and unbiased Tony?

I ask because none of this is mentioned in the yellowhammer report itself...

I know it's very likely that Gove is lying

but can we say for sure that the report is right in that it's the expected rather than the worst case scenario?
Don't blame me - I voted remain

Former head of the civil service (Lord Kerslake?) on Sky news has just confirmed that nowhere in the report does it say that it's a worst case scenario - and he praises The Times for making it public.
Don't blame me - I voted remain