A second referendum - or a general election?

A second referendum - or a general election?

At last, Brexit looks as if it might become interesting as opposed to merely depressing, with both Jeremy Corbyn and Tom Watson saying that they would be prepared to back another referendum if Labour Party members voted for that policy at their conference in Liverpool. Given that a poll showed that 86% of Labour members back the idea (and 91% of those would vote to remain in the EU) this looks distinctly likely.

It would certainly stir up the whole issue in comparison with their current policy, which appears to be to leave the EU but to continue to enjoy all of the benefits of membership. Rrright.... About as likely as Richard Dawkins becoming the next Pope. How an intelligent man like Keir Starmer can stand up and support that policy baffles me - I have this mental image of his nose growing steadily longer every time he talks about it.

However, this begs a lot of questions:

1. How representative of Labour voters is the Party membership? We know that a lot of Labour-supporting areas voted heavily for Brexit.

2. Polls overall indicate that in a second referendum the vote might go the other way (but they said that last time, too). It seems unlikely at this stage that many people will change their minds, but given the die-off rate associated with the venerable age profile of Brexiters, the Remain voters will soon achieve a majority for that reason alone. But will the youngsters care enough to get out of bed and vote, or are they pissed off with the whole issue? Taking all things into consideration, the most likely outcome could be a small majority for Remain, but I doubt that would settle the question.

3. How would the process work? How would a second referendum be achieved, in term of procedural mechanics? Thinking out loud, the following processes need to be considered:

- Negotiations between the government and the EU will have to have reached some sort of conclusion to have anything to vote on, which would form the basis of a second referendum.

- There will be a lot of argument about the question in any referendum: would it be binary, or choose-from-a-list?

- The upcoming Tory Party conference will become more interesting: May will dig in her fashionable heels, but if she still sticks to her Chequers plan she seems likely to get a rocky ride. On the other hand, the Tory Brexiters might be worried enough by any Labour offer of a second referendum to pull together and support her.

- Labour always make the point that they would prefer a general election to come first; for that to happen, a no-confidence vote would have to be passed, and it's hard to see that succeeding unless negotiations with the EU completely break down (this being more likely than it looked a week ago).

- What would be response of the EU be to any offer by Labour of a second referendum? They would presumably want to encourage this, which might make them more obdurate in the negotiations, pushing for a "stay in or hard break" choice. But there is always the danger that British voters will get pissed off with any obvious machinations and tell the EU to disappear up its own fundament.

Somewhat rambling initial thoughts, but at least some alternative possibilities are emerging. We continue to live in interesting times.
Top

...
- What would be response of the EU be to any offer by Labour of a second referendum? They would presumably want to encourage this, ...


I've been speaking to EU diplomats ahead of the Salzburg Summit tomorrow. They are adamant that if the British people wanted a People's Vote, the door is always open and we would be granted the time to do so.

Tony.Williams wrote: ↑
Sun Sep 23, 2018 8:49 am
It would certainly stir up the whole issue in comparison with their current policy, which appears to be to leave the EU but to continue to enjoy all of the benefits of membership. Rrright.... About as likely as Richard Dawkins becoming the next Pope. How an intelligent man like Keir Starmer can stand up and support that policy baffles me - I have this mental image of his nose growing steadily longer every time he talks about it.

I don't know where you got this idea from. My understanding of the Labour Brexit position prior to Conference was, simplified, "slightly-softer-than-Chequers". But importantly with nothing off the table, no red lines, willingness to compromise. They have been clear about remaining in the Customs Union for some time now. They have been clear that "no Irish border" is first priority.

It has been obvious for a long time that a Labour Govt would end up delaying Brexit followed by a very soft Brexit, or scrapping it all together. They just feel the need to try to sort it out first, but won't pull us over the cliff as May is threatening to do. The Irish border issue basically ensures that Labour will end up with either a supersoft Brexit or no Brexit.
thIS sIGnaTure iS an
Top

These are Starmer's six tests:


1. Does it ensure a strong and collaborative future relationship with the EU?

2. Does it deliver the “exact same benefits” as we currently have as members of the Single Market and Customs Union?

3. Does it ensure the fair management of migration in the interests of the economy and communities?

4. Does it defend rights and protections and prevent a race to the bottom?

5. Does it protect national security and our capacity to tackle cross-border crime?

6. Does it deliver for all regions and nations of the UK?

Note No.2 - it is clear that the EU will never allow the "exact same benefits" as EU members have in the Single Market and Customs Union.
Top

Unless we remain in the Single Market and Customs Union. Sorted. Obviously where we will end up if Labour get their way.
thIS sIGnaTure iS an
Top

I doubt that it would be as simple as that. It would essentially mean retaining the "four freedoms" - including freedom of movement, possibly the greatest factor in the referendum result - remaining answerable to the ECJ, would carry an annual fee substantial enough to compensate the EU for the loss of income from the UK, and we would have no say over future laws and regulations.

All those who have thought that reaching agreement with the EU over anything would be a doddle have been severely disappointed to date.
Top

BRINO then.
Don't blame me - I voted remain

I believe the term "vassal state" has been mentioned. “exact same benefits” not covering voting rights then?
Top

Thought I'd better add this helpful little flowchart to this thread as well, for reference purposes...

I am beginning to feel the faintest smidgen of hope, as the path to an agreed Brexit seems to be getting ever rockier and in danger of collapsing underfoot. Rather ironic, and symbolic, that the Johnson brothers (JoBo?) are both rejecting May's proposal from opposite ends of the spectrum of views.

May seems (for whatever reason) to have locked herself into a "my solution or the chaos of a no-deal exit (Nodex?)" but will Parliament allow that?

At their recent conference, Labour voted overwhelmingly in favour of a public vote on Brexit if Parliament rejects May's deal and a Nodex is looming. And while this is not the policy of the Labour leadership, Starmer won a standing ovation for saying that a referendum could include the option of staying in the EU.

May seems to have achieved an astonishing degree of unity from all sides (including the EU and the DUP) that her proposed solution is unacceptable. It is very hard to see it being approved by Parliament. It is also hard to see Parliament approving another public vote with only May's solution or a Nodex on the voting paper.

The main danger may be that chaos engulfs Parliament, with nothing at all being agreed, so we end up with a Nodex by default on 29 March. No doubt the hard Brexiters are relishing that prospect and will stir all they can to achieve it.
Top

That seems as good an analysis as seems possible at the moment.

'Nodex by default' might not be totally disastrous. The EU would not want to disadvantage itself too much and so would countenance as free a trade (and other) arrangement as suited it.

The point being that they would be in total control.

By the way I prefer JoBro.
Don't blame me - I voted remain

The problem with a last-minute Nodex, with no preparation for it, is that it will result in total chaos in many areas (including food supply) with major impacts for quite a long time.

That will not, of course, bother the hard-line Brexiters, who have such a powerful religious devotion to the idea that they would regard any price as being worth paying. Particularly since it would be the poorest who would pay most, not them.
Top

Interesting that in her speech after the Cabinet meeting approved the Brexit proposals, May added a third option to her usual "my deal or no deal", adding "or no Brexit".

My initial reaction was one of surprise - and not a little relief - that the negotiating teams had managed to cobble something together which seemed to mitigate the problems (as much as that can be done). I need to read the arguments of the various commentators on all sides before forming my conclusion, but on the face of it this is better than I expected.

The EU 27 seem unlikely to raise any serious objections, so that leaves the main hurdle - the British Parliament. No doubt the next few weeks will see frantic activity by all concerned to whip up support or opposition to the deal. At the moment, it is hard to see how a parliamentary majority could be achieved for any of the three options.

Labour seem to think that if the deal fails to pass, they will get a general election. But why should the Tories agree to that? Even if they boot May out, they can just elect a new leader/prime minister and carry on.

So just 3 ministers have resigned this morning. So far....ETA and just 10 minutes after that post, Suella Braverman resigns. More to come ?
Top

Osborne having a real go at May, imitating The Sun's attack on Kinnock. 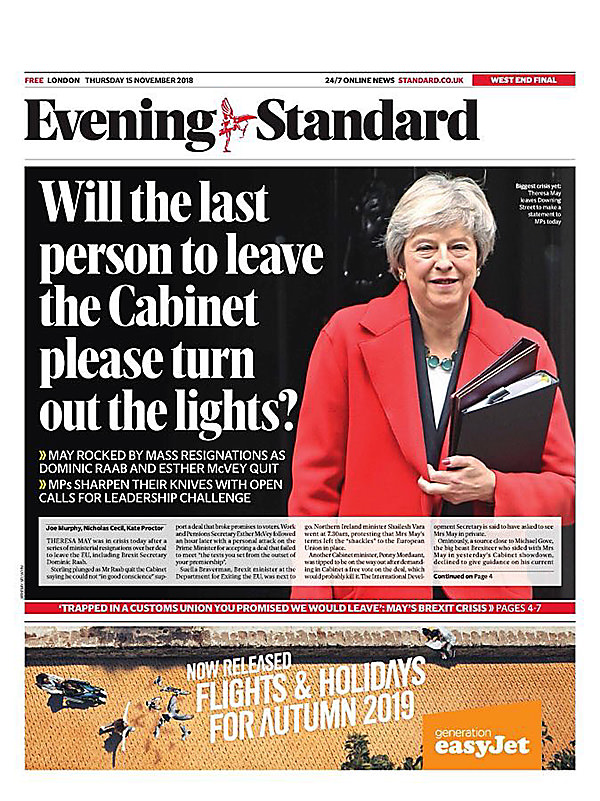