I'll have to study that one...

There was a sad/hilarious Panorama on immigration the other night, when the reporter went to Mansfield, where 70% voted "Leave", to talk to the public. The one issue they all raised was immigration, so the reporter named a whole range of jobs commonly done by immigrants and asked whether or not they should be allowed in to do such jobs, and everyone said "yes, they should". So the reporter then asked: "who would you keep out, then?" They were all stumped, except for one who said "the ones who haven't got jobs".
Top

chaggle wrote: ↑
Thu Mar 08, 2018 3:48 pm
This apparently is the secret EU exit analysis. I have skimmed it but not nearly enough to understand its implications.

Interesting. I don't pretend to be an expert in such analyses, but two messages seem fairly clear:

1. This contains a great many assumptions, because: there is virtually nothing in the way of precedents to guide the analysis; when it was prepared we had little idea of what the UK wanted; and we have no idea of what the EU will allow us to have. It therefore represents little more than a "best guess", which is all we can get at this stage.

2. Despite these caveats, what is clear is that every single option is shown to have a negative effect on UK economic performance; it's just a matter of by how much. Which reminds me of the old saying: "always in the shit, only the depth varies".
Top

I keep asking myself - why are we doing this?

This is basically the same question - is it worth it? - which gets asked and never answered whenever a politician is interviewed these days.

The ONLY reason is because that is what a small majority of the people said that's what they wanted.

On just about every other measure it's not worth it - we shouldn't be doing it.
Don't blame me - I voted remain

The problem - as has been mentioned before - is our messy constitutional arrangements which mean that politicians have a free hand to make things up as they go along, such as effectively binding themselves to accept advisory referendum results, holding major constitutional referendums without requiring a super-majority, and so on.

There was a well-argued proposal in the papers the other week (I forget by whom) proposing a case for holding a new two-stage referendum once the final offer from the EU had been received at the end of negotiations. The ballot should have three options: approving the negotiated offer; rejecting the offer in favour of a complete break; and staying in the EU. The first voting stage would eliminate the least popular option, then the two survivors would pitted against each other in the second round a week later. That seems eminently sensible to me - which means it probably doesn't stand a chance....
Top

Very sensible - so no chance. I'll see if I can find it.
Don't blame me - I voted remain 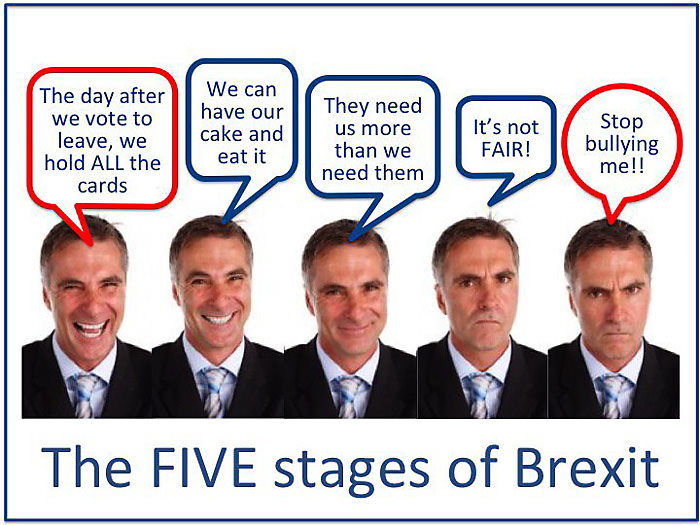 I recall it was a female columnist, probably in the Times.
Top

An interesting analysis from Ian Dunt on today's announcement from Brussels.

"Brexit transition: The can is kicked further down the road."


In a sense, today was a moment of victory for Brexiters in government. They have managed to kick the can a little further down the road. But this merely delays the inevitable and raises the stakes. The crisis did not come now, so it will come later. But it will come. Autumn is going to be a very intense and potentially catastrophic period in British politics.

Everything hinges on the Irish question: How do you maintain an open border when you want to have different tariffs and different regulations?

It has been obvious for a long time that there is no satisfactory solution to the Ireland border problem. The government seems to just keep on hoping that something will happen to make it go away, if they cross their fingers and wish hard enough.

Did you hear Grayling the other evening (I think it was on Question Time) saying that after Brexit there would be no lorry queues at Dover? That rather ignores the fact that there will be colossal hold-ups in Calais etc in both directions, so the costly delays will still take place.
Top

Did you hear Grayling the other evening (I think it was on Question Time) saying that after Brexit there would be no lorry queues at Dover? That rather ignores the fact that there will be colossal hold-ups in Calais etc in both directions, so the costly delays will still take place.

Tony, I've just watched it on the BBC iPlayer. I've given up watching Question Time, or listening to "Today", or spending any other time on BBC News/Current Affairs programmes. Perhaps Humphrys no longer constantly interrupts those whose opinions he disagrees with, I don't know. But I found it infuriating. And when I did watch/listen to BBC progs, I generally found the lack of balance unacceptable.
Top

And another analysis on the Government's "pyrrhic victory", from David Hannay, a member of the House of Lords and former UK ambassador to the EU and UN.


As the government closes in on reaching agreement with the EU 27 this Friday on the terms of the standstill period for the first 21 months after we leave the EU the full enormity of what they have conceded hardly seems to have sunk in to the minds of their usually extremely vocal Brexit supporters.

During 2019/20 the UK will remain in the customs union and the single market, free movement of people, direct jurisdiction of the European Court of Justice, oversight of the Commission will continue just as now. No new fisheries policy. No new agriculture policy. Only we will have no say in the EU’s decision making processes, neither in the Council nor the European Parliament; and no representation in the Commission nor the ECJ. And all that for a standstill period of clearly inadequate duration which will merely postpone the cliff edge to New Year’s Day 2021. Quite a bonfire of the vanities.

Did you hear Grayling the other evening (I think it was on Question Time) saying that after Brexit there would be no lorry queues at Dover? That rather ignores the fact that there will be colossal hold-ups in Calais etc in both directions, so the costly delays will still take place.

Tony, I've just watched it on the BBC iPlayer. I've given up watching Question Time, or listening to "Today", or spending any other time on BBC News/Current Affairs programmes. Perhaps Humphrys no longer constantly interrupts those whose opinions he disagrees with, I don't know. But I found it infuriating. And when I did watch/listen to BBC progs, I generally found the lack of balance unacceptable.

I don't watch any of those, either, except for news bulletins. There is one current affairs programme on the BBC News Channel which is worth watching, Dateline London. It's on during the day on Saturdays, and consists of four guests (typically journalists/commentators, with usually only one from the UK) discussing a couple of current major topics. The contributors give some interesting perspectives from abroad and the debate is usually very civilised, although it got a bit more testy last time due to the inclusion of a Russian... Its main problem is that it only lasts for 30 minutes.

On the subject of queues at Dover, what will happen when (if? I hope) a hard border with the EU is established could be horrifying. Even if the UK has no extra checks and waves all of the vehicles through in both directions, the EU will require France to establish border checks on imports, which means that each vehicle will take several minutes longer than today. Several minutes might not sound much, but when you consider that each vehicle will take three or four times as long to process (at best), the vehicles from the UK will be stacking up at Calais etc. The ports don't have the facilities to accommodate huge numbers of vehicles (or three times the number of customs facilities), so their obvious response would be to limit the number of ferries allowed to dock (same for Eurotunnel, I expect). Which could well mean halving the daily throughput of vehicles. Just imagine what that would do for the queues at Dover, not to mention the UK's trade with Europe.

This may sound a bit heretical, but I'm not so bothered about fisheries. The reason being that the British fishing industry is now only a pathetic remnant of what it was in pre-EU days, so it's not as if we are fighting to preserve something important. I think it's more of a totemic issue than a real one, so we could use it as a bargaining chip.
Top

Do they still do 'From our own correspondent'? That was always good listening.

The Pledge on Sky has good, usually civilised debate.

I watch Andrew Marr on a Sunday.

The 'Channel Lorry Queues' issue is so potentially disruptive they simply have to solve it - it can't happen.
Don't blame me - I voted remain

The 'Channel Lorry Queues' issue is so potentially disruptive they simply have to solve it - it can't happen.

You could say the same about the Irish border....

For how long can the politicians plough on regardless with Brexit, waffling about general principles and blithely ignoring the massive practical headaches which are gradually being revealed?
Top
Post Reply
820 posts